Purpose of the Planning Retreat: To determine the future direction, areas of
focus, and important intended accomplishments of ICIT over the next three to five
years.

Session I
Following a welcome to the 18 participants and introduction of Bill Wood and Don
Chaplain with the Institute for Decision Making (IDM) by ICIT President Kim
Veeder, Bill Wood began the afternoon session.  He initially reviewed the agenda
and the proposed operating principles for the retreat, which were accepted by
the planning team members.  He asked the group if there were any specific
expectations they did not see included in the agenda of which there were none.

Bill then asked the participants to answer individually two questions about
themselves: What they bring to the table?   Why they make an investment of
themselves in ICIT?  The participants were then asked to introduce themselves
and answer the first question verbally.  Following introductions each member of
the group was then asked to share their response to the second question.  The
responses are included with this Summary Report as ATTACHMENT A.

Don began the initial phase of the planning work by asking the participants to
briefly note a response to this question:  Considering the time you have been a
member of ICIT, what single past accomplishment of ICIT are you proudest of
and why?  Don indicated that it is usually beneficial to begin planning work with a
view of past accomplishments to build a common beginning point and to
recognize the efforts that have preceded the current planning work.
ATTACHMENT B lists the responses to this question. Don then asked for voluntary
responses to another question based on their previous responses as to: What do
you see are the key organizational strengths that position you (ICIT) for a strong
future?  Included in the responses were the following comments:

Collaboration

Friendships

 Do it no matter what it takes

 Eagerness to help others

Bill then then begain working with the planning group on determining ICIT’s future direction by asking the participants to first indicidually anser the following question:  Looking forward the next 3-5 years, what, in your opinion should be the primary purpose of ICIT?  The participants were then instructed to work in a group of two or three individual to develop a consensus response on a card and post on the wall.  After all of the responses were posted, Bill then asked everyone to go to the wall and arrange the cards by putting similiar ones together, with the broadest ones at the top.  Following is the result of their repositioning: 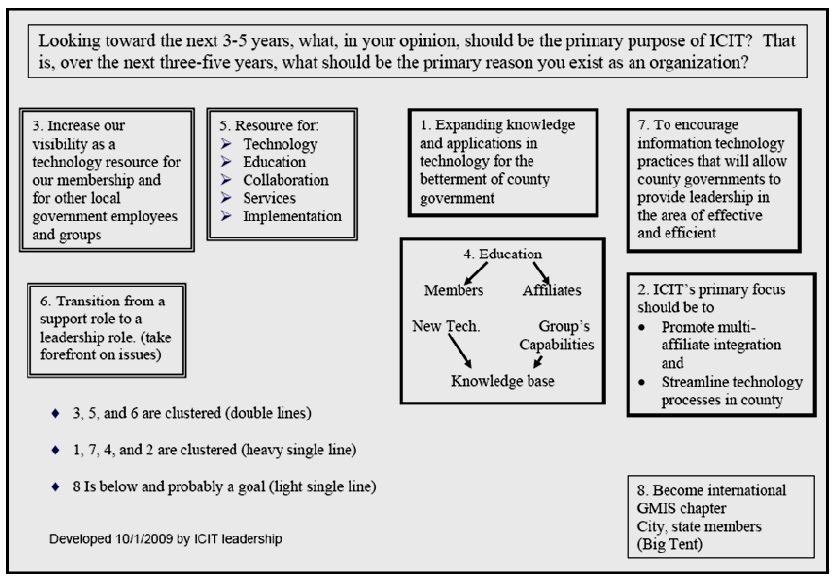 Don distributed another worksheet and asked each individual to respond to the question:  As ICIT, whom will you primarily serve over the next three‐five years? Once they had identified those they expect to primarily serve, the participants were then asked to identify: What they think their expectations of ICIT will be over the next 3 to 5 years?  Once the group members individually answered these two questions, they worked as a small group to identify their consensus primary stakeholders and a list of expectations.  The four small groups identified the following stakeholders and expectations for each (x4 or x3 indicates number of small groups choosing as “primary”):

Following discussion as to the anticipated expectations of the four primary stakeholders, the participants were then asked to respond verbally to the following question: What in your opinion should differentiate ICIT from other groups or organizations that will likely also be serving your primary stakeholders?

Bill began the next section of the planning retreat by sharing with the group a short video titled “Did You Know” that identified a number of significant trends that are going to affect the world in the future (communications tools and expectations, population growth, and similar topics).  The video (http://www.youtube.com/watch?v=jpEnFwiqdx8&NR=1) was intended to set the tone for the next portion of the retreat dealing with trends that the participants believe could/will shape county government.  The specific question: What in your opinion, are the significant trends or issues that will shape county government over the next 3‐5 years?  Bill circulated a worksheet that provided some beginning points to help stimulate thinking for Ideawriting about responses to this
question including:

Broadband out there in next 3‐4 years
Dwindling employee base, fewer people to do more work
Groundswell to make government more efficient and transparent
How do you demonstrate your county’s quality of life?
Consolidation of services at state level from a data perspective (makes it easier, more efficient and more effective) to deal with three plan versus 99)
Interconnectivity
Business processes, efficiencies

After writing additional responses to the question, the participants were asked to share their worksheet with others at their table for added ideas.  Those thoughts felt to be the most significant in shaping county government were to be identified.  Following completion of the individual worksheet by all each of the four tables worked as small groups to arrive at 3 or 4 trends or issues as a response to the following question: Addressing which of these trends or issues should be among ICIT’s highest priorities during the next 3‐5 years? Respondents listed their group responses on newsprint and were asked to provide a brief explanation as to why they believed these were the priority issues/trends for ICIT. Following is what the group’s identified:

Bill thanked the group for their attention and commitment to the afternoon’s planning session and indicated we would reconvene the retreat at 8:30AM the following day.

Session II
Bill opened the morning session by briefly reviewing yesterday’s work including a handout of the input regarding the primary purpose of ICIT; a hand out as to the four identified primary stakeholders and their identified expectations; and the 11 tends or issues identified as among ICIT’s highest priority over the next 3 to 5
years.

Bill then facilitated the group in the application of Interpretive Structural Modeling (ISM) software to identify what should be the top areas of focus from the 11 previously identified trends and issues.  Following participation in the ISM process the following five issues/trends are those the group believes ICIT should champion: 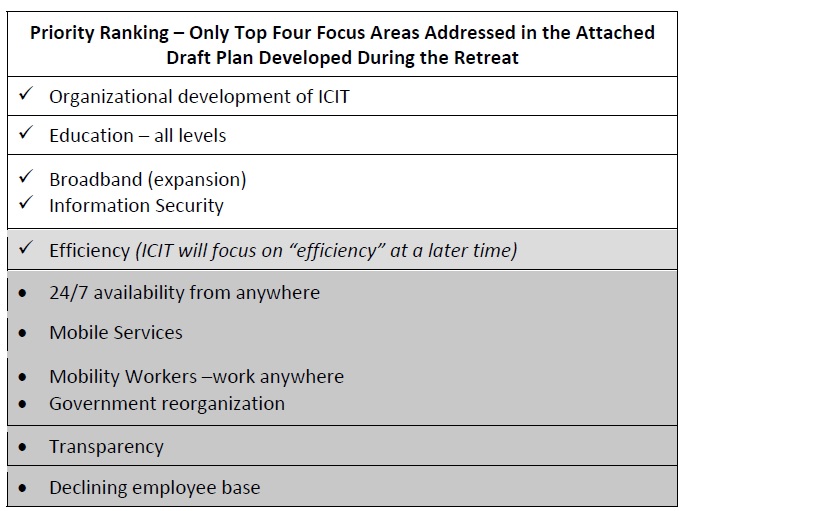 Because of time limitations, the efficiency focus area was not reviewed.  It was suggested that perhaps at one of the future schools a 1 ½ hours session could be set aside for brain storming as to “How it would be possible to leverage technology to do things better at the county level”?

Bill then began working with the participants to help identify potential ways to increase active participation in ICIT.  As a beginning point, he reviewed the responses to the initial introduction question: Why do you make this investment of yourself in ICIT?  He then asked for thoughts as to the ways similar motivations could be imparted to less active members.  ATTACHMENT D provides a list of the ideas put forward by the group.

To conclude the retreat, Bill reviewed the initial Purpose of the Retreat and asked if everyone felt the session has served to meet that purpose statement.  There was agreement it had.  Bill also asked if there were any other issues that someone had thought would be dealt with during the session but was not addressed.  Twocomments surfaced:

There being no further discussion, Bill thanked everyone for their cooperation and active participation in the retreat. He and Don will have a summary report recapping the information developed during the retreat to Kim within seven to ten working days.  Kim also thanked the participants along with Bill and Don for
facilitating the retreat.

Question:  Why do you make this investment of yourself in ICIT?

Question:  Considering the time you have been a member of ICIT, what single past accomplishment of ICIT are you proudest of and why?

3. Being part of ICIT’s creation and ISAC’s acceptance – great group together for singular purpose.
4. Became ISAC affiliate – took a few years to accomplish.  That resulted in the other affiliates getting ICIT’s input and participation in their projects.
5. ICIT’s acceptance as an affiliate of ISAC. Opened the door to engage IT/GIS staffs across the state.  Gives the group opportunity to combine talents to develop projects such as GIS Data Depository and Iowa Land Records.
6. Being an ISAC affiliate provides credibility with other officials.
7. The original ICIT organizers lobbying for ICIT to become our own affiliate showing the importance of technology.
8. Raising the awareness of technology among ISAC and its affiliates.
9. The support of other affiliates.
10.Increased attention to technology by ISAC and its affiliates: ISAC staff, affiliate websites, CSN‐HRRA clearing house.

11.Working with the Mid‐Year 2009 conference committee.  But the real heroes of this were Mark, Wayne and Kim, but it was great conference because of all of the committee members working together.
12.Mid‐year conferences: excellent forms of networking and knowledge transfer.
13.Mid‐Year conference 2009 was the best – keep getting better.
14.Mid‐year 2008 – the 2nd best Mid‐Year ever!
15.The importance of our Mid‐Year Conferences along with our role in county government.
16.Mid‐Year Conferences.

17.The total willingness of members to share and even train other agencies or affiliates, to have added presence working with other affiliates.
18.The leadership of the founding fathers of ICIT – no one has egos to fight with.

Objective 4 – Encourage participation on board and committee roles

Focus Area: Education at all levels

Increased self‐promotion at conferences, mailings and follow‐up contacts
Mid‐Year program topics need to be relevant to other affiliates
Coordinate and communicate with other affiliates’ education committee

Time frame: Begin in 6‐12 months from plan adoption and then on‐going

Objective 4 –Build and maintain a knowledge base on the web

Time frame: Immediate implementation with a one (1) year time frame for completion

Establish an ICIT Technical Standards Committee
Gather/research what other governments have done to establish standards
Compile findings, condense results and make recommendations to ICIT and
CoSTAR
CoStart to disseminate agreed to standards

Provide information on Connect A Nation process, implementation process and time tables
Provide working definitions as to: What defines Broad Band, what is underserved and unnerved areas, what is classified as speed and throughput
Develop profiles of current landscape of players in the State of Iowa
Have John Gillispie address questions regarding the ICN and possible roles it may play in the solution of Broad Band access

Objective 4 – Research and develop an IDS Sensor Network to improve overall knowledge regarding security threats that may be affecting counties.

ICIT has assisted more than 20 Iowa Counties with technology solutions?  Let us help you!